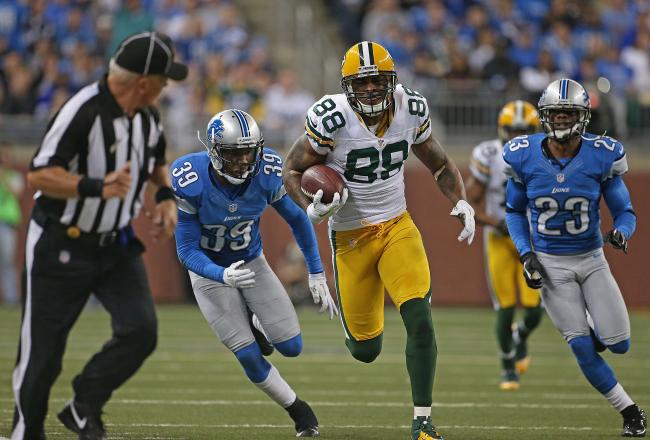 Happy Thanksgiving recovery day/Black Friday to you all.  In this weeks installment of Hobbjective Analysis, I will be looking at Jermichael Finley’s 31-yard screen play and going in depth on why the Packers executed the play so well.

The Situation: The Packers are trailing by 6 with only 3:43 left in the 4th quarter.  While the Packers haven’t exactly been playing stellar football, the Detriot Lions have been all over the place, Matthew Stafford is consistently overthrowing his targets while getting chased around by a Packers defensive front seven that is missing Clay Matthews.  The Packers know that they have to score on this drive in order to win the game, going 4 and out or committing a turnover essentially seals the game for the Lions. The formation: The Packers are in a 3-1-1 (3WR-1TE-1RB) set with WR James Jones (89) split wide left, WR Jordy Nelson (87) split wide right and WR Randall Cobb (18) in the right slot.  TE Jermichael Finley is inline of the right tackle. In the backfield RB James Starks (44) is aligned to the right of QB Aaron Rodgers, who lines up in the shotgun.  On the offensive line, there has been a lot of shuffling going on; after starting RT Bryan Bulaga landed on IR, LG TJ Lang has shifted over to RT while Evan Dietrich-Smith (62) has taken LG Lang’s spot.  The three other starting linemen (LT Marshall Newhouse (74), C Jeff Saturday (63), RG Josh Sitton (71)) remain in their original positions.

In response, the Lions play the standard 4-3, Tampa-2 scheme with 4 defensive linemen, 3 linebackers, 2 corners and finally 2 safeties each aligned about 10 yards away from the line of scrimmage.  Overall, the Lions had been playing the majority of the game (and their season) under this formation.  The Lions have heavily invested in their front 4 in order to generate pass rush without having to send extra players and they need to cover up for a tattered defensive secondary who has back-up and back-up of the back-up safeties in play. The Snap: RB Starks leaks out of the backfield immediately while Rodgers drops back to a clean pocket.  On the perimeter, the Lions are playing man-cover with their corners covering WR Jones and WR Nelson on the outside while OLB Justin Durant (52) covers WR Cobb in the slot.  This leaves the safety to cover TE Finley while presumably the other safety drops back into zone coverage making it a cover-1 man defense. The Catch: Finley runs the a flat route (1) and positions himself for a receiver bubble screen.  This seems to have caught the Lions completely by surprise as the safety covering Finley is about 10 yards away from him when he catches the ball.  The next important thing to note is that WR Cobb and WR Nelson are already blocking their respective defenders by the time Finley catches the ball. Cobb’s Block: WR Cobb has perhaps the hardest assignment of this play, namely blocking an outside linebacker who not only outweighs him by 50 pounds but is also used to wading through traffic and making the tackle.  Here you can see Cobb actually has a pretty poor angle on Durant but still manages to push him off course from intercepting Finley. Nelson’s Block: WR Nelson not only makes a spectacular initial block but he also manages to push the cornerback into the safety thus taking out both players. This is actually quite a feat for a wide receiver and is probably the main reason why this ended up being a 31-yard play instead of a 10 yard play. Yards after Catch: With such good blocking by his wide receivers, TE Finley bursts through the seam and manages to gain at least 25 yards after the catch before being pulled down.

Conclusion: This is actually a pretty difficult play for the Packers to pull off and I would suspect the Lions weren’t expecting them to execute as well as they did. First off, asking wide receivers to block (and I mean really block) is often a tall task, unless you are Hines Ward, chances are good you aren’t very good at getting the correct angle and correct technique to successfully block someone (it does help that cornerbacks aren’t all that used to getting around blocks but nevertheless).  The fact the both Cobb and Nelson execute terrific blocks is probably something the Lions would have bet against.  The second point to note is that Finley has never been known for his lateral agility.  Simply put at 6’5″ and 247lbs, Finley doesn’t have the body type that can rapidly change directions (compare him for instance to Cobb).  But in this play, Finley is plenty agile as he catches the ball and then weaves his way through his blocks to make a big play.

In terms of the Lions defense, I can see why they would play their coverages the way that they did.  Firstly, one common method for attacking the Tampa 2 defense is to pass the ball to the tight end in the seams between the safeties and the dropping middle linebacker.  Add to that the Packers predisposition to take shots down the field (perhaps not as much this year but definitely last year), and Aaron Rodgers “so-so” execution against the two deep high safety look through this season and it makes sense that the Lions would keep their safeties far back.  Unfortunately, having your safety 10 yards away from the tight end is a recipie for diaster when it comes to a quick throw or screen pass, but as the Lions defensive secondary supposedly have the play in front of them, making the tackle for a short gain should have been the plan, had it not been for exceptionally good blocking by Nelson and Cobb