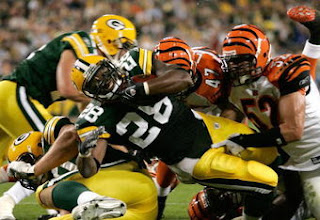 In any discussion I have seen of the current Green Bay Packers running backs, the theme is the same: Can Ryan Grant return to the form of his rookie year and if not, will they finally give Brandon Jackson a chance to start?

In a recent interview, Packers beat writer Greg Bedard of the Milwaukee Journal was asked why Brandon Jackson did not get more of an opportunity to play last year. Bedard stated without hesitation that there were people in the Packer organization that wanted Ryan Grant to be the starter last year, even as he was struggling on the field and battling a hamstring injury.

All indications are that it was not the coaches, but the Packers front office pushing Grant as the starter to justify the new contract he was given.

As a running back from the University of Georgia, Kregg Lumpkin is in good company. Herschel Walker, Terrell Davis, Rodney Hampton, Garrison Hearst and other top NFL running backs have all came out of “Tailback U”.

Lumpkin was expected to have as good a college career as any of them. But that did not happen. Lumpkin made the Packers roster as an undrafted rookie, and then ended up spending most of the season on injured reserve.

So what has he done for me to say he is the Packers’ best running back? Why would I go out on such a precarious limb? What evidence is there to support this hypothesis?

Well, a lot of it may be circumstantial, but let me present my case.

He started all four year at running back, and rushed for 2,088 yards during his junior season and 1,456 yards with 15 touchdowns as a senior.

Lumpkin was a Parade All-American and named the number one overall HS recruit from the State of Georgia. He was also ranked as the second best running back prospect in the entire nation, second only to some kid named Reggie Bush.

In 2003, as a true freshman at Georgia, Lumpkin played in 12 games and finished as the team’s second leading rusher with 523 yards on 112 carries. But he missed the first two games with a hamstring injury, and fought it the rest of the year, starting a pattern of physical problems.

That pattern continued the next year. After being name “Most Improved Running back” at Spring practice, Lumpkin came to training camp ready to win the starting tailback position. That quest lasted about an hour, as he suffered a season-ending ACL injury in the first practice and was put on medical red-shirt for 2004.

Lumpkin battled back from that serious injury to play in the 2005, season, albeit in a part-time role. He appeared in 13 games, but was used carefully and sparingly, gaining 335 yards on the season, while averaging 5.1 yards per carry.

In 2006, his 3rd year of college football, Lumpkin started nine games at tailback, rushing for 800 yards and 6 TDs, while averaging 4.9 yards per carry. This was also the year he started to show his soft hands and pass-catching skills, pulling in 17 passes on the year.

Lumpkin was primed and ready for his senior season. Listed as the No. 1 Tailback, Lumpkin played in only five games due to a broken right thumb, the arrival of Knowshon Moreno and then another serious injury to his left knee, once again requiring season-ending injury.

Lumpkin evidentally made the most of all his time on the injury list. He concentrated on his studies and graduated with dual B.S. degrees in consumer economics and housing.

With his inability to stay on the field as well as a poor 40 time at the NFL Combine (4.64), Luimpkin’s name was not called in the 2008 NFL Draft. But the Packers’ southeast scout, Brian Gutekunst, college scouting director John Dorsey and general manager Ted Thompson all liked what they had seen of him. After the draft, quickly signed Lumpkin to the team as an undrafted free agent.

During preseason, Lumpkin got an opportunity to show what he could do and made the most of it. He finished the preseason as the Packers leading rusher (38 carries, 153 yards, 4.0-yard average, one touchdown) and also added seven receptions for 59 yards and another TD.

The Packers were so impressed with Lumpkin that they cut three veteran running backs (Noah Herron, DeShawn Wynn and Vernand Morency) and kept Lumpkin as the No. 3 Running Back. The Packers coaches were sure they had themselves a real find.

Head coach Mike McCarthy said, “He runs physical. He continues to improve. He breaks tackles. He’s a better player when he gets past the line of scrimmage than I originally thought. As he gets more comfortable, you see the physicality of his play has increased. I thought he did some good things.”

Offensive coordinator Joe Philbin said the 5-foot-11, 228-pound Lumpkin is “a pretty good fit for this system, with his style of running. He’s not a real dancer, he’s got a little bit of straight-line (speed), which I think fits us well. He’s got nice size, he’s a good-looking guy in pads. He looks like a running back. He’s got some good attributes, no question… He’s certainly produced when he’s been in there.”

Lumpkin was ecstatic to make the Packers roster, but expected it. “I don’t think I’ve surprised myself,” said Lumpkin, “I feel confident in what I’m doing.”

With Ryan Grant and Brandon Jackson nursing injuries going into game two vs. Detroit, Lumpkin got a lot of work in practice that week with the No. 1 offense. While both Grant and Jackson were expected to play, the Packers were not worried if Lumpkin had to be pressed into service.

“I think he could handle it all,” coach Mike McCarthy told reporters in Green Bay. “He’s done a very good job with his opportunities.”

Grant and Jackson did play, but the Packers still got Lumpkin some playing time and he did well. He carried the ball once for nineteen yards and caught 3 passes for 22 yards. After the game Coach McCarthy said that Kregg Lumpkin “absolutely” earned more playing time going forward with his Week 2 effort.

But alas, the injury bug would hit once again. Lumpkin suffered a hamstring injury in practice and spent the next three weeks trying to come back, but to no avail. The Packers finally decided they need a healthy No. 3 running back on the roster, so they put Lumpkin on the injured reserve list and called up DeShawn Wynn from the Practice Squad. Once again, Lumpkin’s season came to an early end.

So now that you know the Kregg Lumpkin story, you can see it is one of disappointment and unrealized potential. Admittedly, there isn’t a lot of cold hard evidence to go by. But I do remember watching him in pre-Season last year and being really impressed. I remember thinking at that time, without knowing a thing about him, “this kid is going to make the team”.

What did I like about him? He is a North-South runner that runs hard, low to the ground and is tough to bring down. Unlike Ryan Grant, runs with his head up and has great vision.

Unlike Brandon Jackson, he picks his hole quickly and has the ability to drive the pile. He also has soft hands as a receiver and has proven he has the ability to pass protect. The only thing he lacks is breakaway speed, but the Packers do not exactly design their offense for the 60 yard run anyway.

As described earlier in this article, the Packers coaches like what they’ve seen of Lumpkin. They see him as the move-the-chains type running back their offense calls for.I have also studied video of him at Georgia. He always seems to make the most of every run, and has been a consistant 5 yard-per-carry guy.

The big question of course, is, can he stay healthy? While there is no historical evidence to make you think he will, there is reason for hope. That hope lies in the Packers’ Strength and Conditioning Hall of Fame coach, Dave “Red-Man” Redding.

Red-Man is an old-schooler, prefers the free weights over machines, is a motivator and is most concerned with keeping players on the field. Here is how Redding describes his philosophy:

While the Packer Organization would prefer Ryan Grant to live up to the big contract they awarded him, a healthy Lumpkin has consistently caught the eye of the Packers coaches.

If he can stay healthy, perhaps as the year progresses he will earn a share of the carries, especially if Grant struggles once again. At the very least, he may steal some snaps from Brandon Jackson.

Kregg Lumpkin could be the best running back on the Green Bay Packers. I know, it is a big leap of faith, a roll of the dice and a lot of “IFs”. But it is my feeling and I am sticking with it.

In his appropriately-named poem “IF”, Rudyard Kipling writes:

“If you can trust yourself when all men doubt you, but make allowance for their doubting too.”