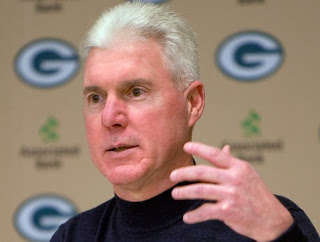 Expectations can bring worries. And folks, I’m worried. I expect the Packers to do well this season. I expect the offense to be better balanced and more productive. I expect Dom Capers’ revamped defense to be a big improvement over last year. And finally, I expect them to challenge for the NFC North Division Title.

So what am I worried about? Well, those of you who are superstitious turn away. If you believe in jinxes or “the evil eye”, stop reading. Go ahead and knock on wood, because I’m going to say it;

What if Aaron Rodgers suffers a season-ending injury?

What if the Packers come together in preseason, then beat the Bears, Bengals and Rams (totally conceivable) to get off to a quick 3-0 start. But the unthinkable happens towards the end of the Packers romp over the Rams. Mike McCarthy is slow to get Rodgers out of the game and some 3rd string Ram DE trying to make an impression crashes into Rodgers knee. One torn ACL later, Rodgers’ season is over.

Now, is there anyone out there that really believes either Matt Flynn or Brian Brohm can step in and continuing leading the team to a successful season? Any hands…? I didn’t think so.

As reported by the Green Bay Press-Gazette, even Offensive coordinator Joe Philbin, when asked recently about the progress of his two young quarterbacks, had to think about it for awhile. When he finally did answer, he could muster no better than an unenthusiastic “Well, certainly they’re better than they’ve been”. How’s that for a ringing endorsement from your own coach?

The man responsible for this bad situation is of course, Packers GM Ted Thompson. Thompson has proven to be a polarizing figure among Packers fans, mostly because of his role in the Brett Favre saga. I find myself straddling the fence. There are things he’s done I like, there are things I don’t like. This one, I am not on board with. It’s a bad idea and a huge gamble, like going to Vegas with one year’s salary and putting it all on a roll of the dice at the craps table.

Thompson’s out there on an island with this one. I have to wonder, has any other NFL team ever done this? Starting the 2008 season with a first-year starter and two rookies as backup quarterbacks was as dangerous a move I remember coming from an NFL team. Add in the fact that neither of the rookies even remotely looked like NFL quarterbacks during that preseason, and you had to seriously doubt Thompson’s sanity.

The only thing that made it palpable to me was that I had few expectations last year. I had serious doubts about the season before it even started, so I wasn’t worried about what we would do if disaster struck. This season is different. As previously stated, I have expectations. I am not willing to accept throwing our season away if something happens to Rodgers. And make no mistake, if that particular disaster struck, the Packers season would be OVER. No chance at the Division Title and no playoffs – again.

So why would Ted Thompson choose to roll the dice again? Why did he do it in the first place? The only reason one can assume is financial. Thompson didn’t want to in 2008 and still doesn’t want to in 2009, spend the money to bring in an experienced backup quarterback. He doesn’t believe in spending money on short term solutions. I do respect a lot of the financial decisions he has made. It’s not a simple job being in the smallest NFL market, and running the only non-profit, community-owned, major professional sports team in the United States.

Thompson has to look for every opportunity to save money, and this was obviously an area he chose to do so. But what exactly does bringing in an experienced backup quarterback cost you? Looking at various signings around the league this off-season, the going rate seems to be $1,000,000 or less for a 1-year contract. For example, the World Champion Steelers signed Charlie Batch for $895,000, the Giants brought back David Carr for $1,000,000 and the Texans brought in Rex Grossman for $625,000.

While none of these guys will be starting quarterbacks on their own, at least they have enough experience that you could build a workable game plan around them. And is $1,000,000 that much to spend for a one year insurance policy at QB? Not when you’re paying Brian Brohm $2,000,000 to be a 3rd string quarterback. Whatever Ted Thompson is thinking, he certainly can’t believe the Packers are in good shape if Rodgers goes down, can he?

So here we are in July of 2009. With training camp only a few weeks away, it’s still not too late. Of course, this is a move that should have been made already. The most attractive free agent backup quarterbacks have already been snatched up by other teams.

However, there are still two guys out there that could be brought in relatively cheaply as some veteran insurance; two guys that each have 15 years experience and have played 260 NFL games between them; Gus Frerotte and Trent Green. I would take either one over Brian Brohm and/or Matt Flynn. Keep whichever of the kids you like best, but I need some veteran insurance on the Packers. After all, I have expectations…

Officially listed as retired right now, Green could easily be lured back for another year as a #2 QB. Green is only two years removed from starter staus at Kansas City, where he played 6 seasons as their #1 QB. Since then, he had the misfortune of being the backup QB on the  2007 Dolphins (1-15) and the 2008 Rams (2-14). Saw limited playing time, but admittedly was as bad as the rest of his teammates when he did play.

Passed over by Minnesota for Sage Rosenfels in this off-season, Frerotte did a decent job with the Vikings last year. He started eleven games for the Vikings and their record in those games was 8-3. The year before he was the backup to Marc Bulger on the 4-8 Rams. His last season as a starter was for the 2008 Dolphins, where he threw for 3000 yards, 18 TDs and 13 Ints.

So which of these NFL nomads would be best for the Packers? My choice is Gus Frerotte. When handed the reigns to a decent Vikings offense last year, he didn’t screw it up (sure, having Andrian Peterson helps). The Packers would provide Frerrote with a much better group of receivers than he had in Minnesota. In addition, as acknowledged by Brett Favre, the Vikings Offense is very similar to the Packers offense, so Frerotte would have no trouble with the transition.