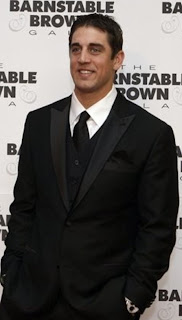 1) Drop the Jesus look and please stop wearing those ridiculous hats to the post-game press conferences. Dude, we know you’re from California, but you’re not a skateboarder—you’re an NFL quarterback, dammit. Please try looking like one. (Writer’s note: Looks like Aaron may have already gotten this advice from somewhere else. See the above photo of him at the Kentucky Derby clean-shaven and looking very professional)

2) Listen Aaron, even if it’s true, do you really want to go around admitting Princess Bride is your favorite movie? Something like “Die Hard” would probably sound a lot better. Or maybe that’s just how you show your sensitive side to the hot chicks you’re hitting on in Vegas. Yeah, I guess that might help. Never mind…

3) Scrap the nickname A-Rod. It’s taken already, and it has negative vibes. See definition in dictionary: “A-Rod—Nickname for pretty-boy, narcissistic, robotic and incredible over-rated professional athlete that would sell out his mother for more money or fame.”

4) Stop being so damn polite. Show frustration when McCarthy calls three straight hand-offs for no gain on first and goal at the three. Give your defense a hard time when they give up 50-yard passes late in games right after you drove the team for a score. Give Mason Crosby a good swift kick in the ass when he gets a 38-yard field goal blocked to lose a game. And while you’re at it, try to get McCarthy riled up, too. (But that’s a different article.)

5) In all seriousness, continue the pattern you set in college and as a pro. In two years as California’s starting quarterback, you threw for 43 touchdowns and only 13 interceptions in 665 attempts. You hold the school career record for lowest percentage of passes intercepted at 1.95 percent, This season with the Packers, you threw for 28 touchdowns and 13 interceptions in 536 attempts. OK, you did try to force a few throws late in games when behind, but if you learn from those mistakes, Green Bay will be lucky enough to have a damn good quarterback for years to come.

Be you’re own man, Aaron, but be THE man.