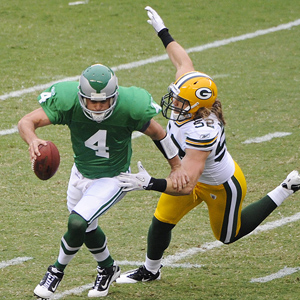 Last time these two teams met was in the NFC wildcard game in 2010.  However, the Packers got to experience the beast that they themselves had created; during the season opener Clay Matthews III knocked out starting quarterback Kevin Kolb with a concussion, which paved the way for the resurgence of Michael Vick, who had been just released from jail after pleading guilty to operating a dog fighting ring.  With the more dynamic Vick leading the way with vertical receivers DeSean Jackson and Jeremy Maclin, the Eagles boasted one of the most dangerous offenses that head coach Andy Reid had ever fielded.

However, during the playoffs the Eagles failed to get much going on offense while the Packers watched as rookie James Starks, who had been hobbled by injuries all season, burst onto the scene with 123 yards rushing, a Packers record for a rookie running back in the playoffs and saw a little glimpse of what was to come in their stunning 2011 season when an unknown undrafted rookie blocking tight end named Tom Crabtree made his first touchdown reception by sneaking past a linebacker.

On special teams, the Packers didn’t make many mistakes, which couldn’t be said for the Eagles as kicker David Akers left 6 points off the board with two missed field goals.  The Packers also enjoyed several big plays on defense, notably Clay Matthews completely destroying tackle Winston Justice and a last minute end zone interception by Tramon Williams that pushed the Packers into the divisional round against the Atlanta Falcons.

A lot has changed for the Eagles since the 2010 playoff game.  13 year incumbent Andy Reid was replaced by college football phenomenon Chip Kelly, who had lead the Oregon Ducks to a 46-7 record with 4 bowl appearances with his fast-paced, spread offense.  While Kelly and his super speed offense sent shockwaves throughout the NFL after their opening game against the Redskins after calling 53 plays in the first half, the rest of the NFL adjusted and the Eagles have been the epitome of “up and down” with some thrilling victories and some crushing defeats which explains the 5-3 record.

While Michael Vick still holds the starting quarterback position in name, Nick Foles has made a case to remain under center after a record breaking 7 touchdown, 158.3 QB rating touchdown performance last week against the Oakland Raiders.  On the other side of the ball, the Eagles defense has been largely ineffective, sorting out much like the Green Bay Packers in terms of defensive efficiency.

Obviously an Aaron Rodger’s lead Packers team is markedly different from a “some guy named Dave” lead offense and the Eagles are now probably the favorites.  However, the Eagles will need to study extra tape as the Packers offense will look remarkably different with Seneca Wallace under center, naturally the Eagles will expect to see a lot of Eddie Lacy and James Starks but with a week to install some unscouted looks and cater the offense to Wallace they should also need to keep their disciplined.  Keep in mind the last time the Packers had a week to work with the backup quarterback, Matt Flynn destroyed the Detroit Lions with 6 touchdowns.

The Eagles are very much in the playoff race as they trail the Dallas Cowboys in the NFC East while the Washington Redskins are only a game behind Philadelphia and a fully healed RGIII could make a push.  The Eagles are also only 1 game down in the division and the ulimate winner of the NFC East has definitely not been decided.  From a schematic point, Chip Kelly needs to prove that his offensive philosophy will be as effective in the pros as it was in college.

One of the biggest disadvantages is the amount of times the quarterback gets hit; Michael Vick has been battling an assortment of injuries including a hamstring injury that sideline him several games.  Nick Foles has already suffered a concussion and Matt Barkley was overwhelmed in his limited time in the Cowboys game.  Simply put, NFL defenders are quicker and stronger than in college and Kelly must prove that he can protect his quarterback while still producing points in order to become a truly successful offense.