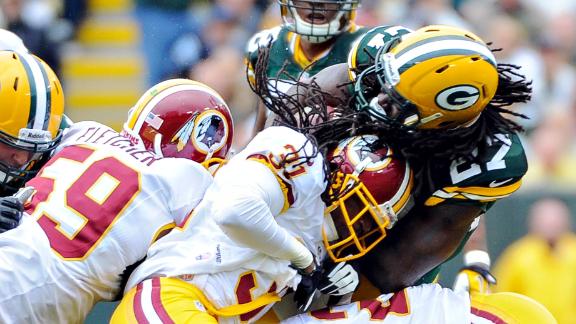 A lot of fans were angry and confused in regards to the Brandon Merriweather hits on Eddie Lacy and James Starks.  And rightly so, Eddie Lacy suffered a concussion on his first carry and was done for the day and naturally there was a lot of outrage as to why no penalty flag was thrown.

Afterwards, many fans have been calling for more consistency in terms of penalties, as they don’t understand why Merriweather wasn’t penalized on the Lacy hit but Dashon Goldson and Bernard Pollard were.  Obviously Packers fans were a little happier with “karma” being served with Merriweather ultimately knocking himself out on the James Starks’ hit but some Washington Redskins fans have complained that actually Starks should have been penalized for knocking Merriweather out (which is pretty ridiculous since defensive players attack the offense, not the other way around).

I think that realistically fans don’t really understand the rules of the game and only use them when it benefits their team, so in an effort to see what the rules are exactly and how they apply to these hits, I’ve gone through the NFL rulebook and some of their ruling memos in an attempt to see what exactly is going on.

From the first look I think many fans would claim that this should have been a penalty because Merriweather leads with the crown of his helmet on Eddie Lacy, who appears to trip over Jordy Nelson (who was blocking), gets turned towards the sideline and therefore does not see Merriweather coming.  The rule that most fans are thinking about in this case is Rule 12, Section 2, Article 7 (b): Players in a defenseless posture.

Prohibited contact against a player who is in a defenseless posture is:

(2)Lowering the head and making forcible contact with the top/crown or forehead/”hairline” parts of the helmet against any part of the defenseless player’s body; or

(3)Illegally launching into a defenseless opponent. It is an illegal launch if a player (1) leaves both feet prior to contact to spring forward and upward into his opponent, and (2) uses any part of his helmet (including the top/crown and forehead/”hairline” parts) to initiate forcible contact against any part of his opponent’s body. Note: This does not apply to contact against a runner, unless the runner is still considered to be a defenseless player. – NFL 2012 Rulebook

I think using these rules, the Eddie Lacy hit should be considered a penalty; Merriweather clearly lowers his head and makes forcible contact with the top of his helmet (in fact he has his head lower so much he actually hits Lacy with the back part of the crown).  Furthermore, he’s dangerously close to illegal launching, while both of his feet are on the ground as he initiates contact with Lacy, they’re both together and he doesn’t make much of an attempt to use his arms to wrap up Lacy.  I think for fans, this constitutes a penalty, however it becomes important to know what qualifies Lacy as a defenseless player, which is defined by the NFL in Article 12, Section 7 (a): Players in a defenseless posture.

Players in a defenseless posture are:
(1) A player in the act of or just after throwing a pass;
(2) A receiver attempting to catch a pass; or who has completed a catch and has not had time to protect himself or has not clearly become a runner. If the receiver/runner is capable of avoiding or warding off the impending contact of an opponent, he is no longer a defenseless player;
(3) A runner already in the grasp of a tackler and whose forward progress has been stopped;
(4) A kickoff or punt returner attempting to field a kick in the air;
(5) A player on the ground;
(6) A kicker/punter during the kick or during the return (Also see Article 6(g) for additional restrictions against a kicker/punter);
(7) A quarterback at any time after a change of possession (Also see Article 8(f) for additional restrictions against a quarterback after a change of possession);
(8) A player who receives a “blindside” block when the blocker is moving toward or parallel to his own end line and approaches the opponent from behind or from the side, and
(9) A player who is protected from an illegal crackback block (see Article 2). – NFL 2012 Rulebook

Obviously Lacy is a running back so only qualifiers 2 and 3 are applicable.  Unfortunately, I’m not sure Lacy qualifies as a defenseless player in either situation; #2 is intended for receivers who have just caught the ball and haven’t had a chance to protect themselves (the classic instance of this would be the James Harrison hit on Mohammed Massaquoi) and since Lacy is running the ball this doesn’t apply.  #3 also doesn’t apply since no defender is in the act of tackling Lacy and Lacy’s forward progress has not been stopped.

Unfortunately for Lacy, I think this particular situation has fallen through the cracks, while it appears that Lacy would have had no way to protect himself from Merriweather’s hit due to the particular situation of the play, Lacy cannot be considered to be a defenseless player according to the rulebook.  From the referee’s perspective, Lacy could have been in the middle of a spin move in which case he definitely would not have been a defenseless receiver.

Overall, after reviewing the tape and going through the interpretation of the NFL rulebook, I have to say I think the refs made the right call even though I do feel that running backs who get flipped into the air should qualify as a defenseless posture much in the same way that a wide receiver going to a jump ball is a defenseless receiver.

In all honesty, it looked like Merriweather should have been penalized for his hit on James Starks as well.  I remember from the game I felt Merriweather again lowered his helmet and wasn’t making much of an attempt to use his arms to wrap up and tackle.  This hit is different from the hit on Eddie Lacy because Starks is completely aware of Merriweather and also drops his head in order to protect himself and therefore neither player can be considered as a defenseless player. As I mentioned before, some Redskins fans have been arguing that under the new rule change Starks should have been penalized for hitting Merriweather.

It is prohibited for a runner or tackler to initiate forceable contact with the crown of the helmet outside the tackle box.  The tackle box is an area extending from tackle to tackle and from 3 yards behind the line of scrimmage to the offensive team’s end line. There are three components for this foul:

(1)the player must line up his opponent

(2)he must lower his head

(3)he must deliver a forceable blow with the crown of his helmet to any part of his opponent’s body.  The crown is the very top of the helmet.

Violations of this rule will result in 15 yard penalties for unnecessary roughness and possible penalties.  If the contact occurs in the tackle box or if all three components are not present there is no foul.  If both players are moving at an angle and neither player has lined up his opponent the contact is legal.  Making a tackle or finishing a run with the shoulder is also legal.-2013 NFL rule changes

Again I think the referees were correct in not calling a penalty, the important point is that all three components must present in order for it to be a penalty.  While both Starks and Merriweather are out of the tackle box, both lower their heads and both attempt to deliver a forceable blow with the crown of their helmets (arguably either one could have been leading with their shoulder, but that also is legal), the missing component is that neither has the chance to line each other up.  Obviously Starks in running down the sideline which really limits his ability to run in any other direction but straight forward and Merriweather is coming from such a sharp angle that he has no time to adjust and is simply trying to get to Starks as fast as he can.

Ultimately both Merriweather’s hit and Starks’ response were both legal and unfortunately Merriweather was concussed as a result.

I think initially, fans have been trained at this point to look for helmet to helmet hits and start yelling for the flag; both the NFLPA and the NFL itself have put such a big emphasis on concussions that it’s now on the minds of every player, every coach and every fan.

Personally I feel like this is a good thing; concussions are a very serious problem with football and players need to be protected so that they can live healthy normal lives after they stop playing football.  What I think fans do not realize is there is a method to the madness and referees aren’t just calling penalties randomly as much as it seems.  Both Merriweather hits were legal according to the NFL rulebook and therefore should not have been penalized.

I should mention that the $42,000 fine that Merriweather incurred for the Lacy hit has nothing to do with the ruling on the field, just like Rodger Godell has the power to penalize players for actions outside the realm of the football field (see Ben Roethlisberger) Godell can also hand out punishment on plays that did not incur a on the field penalty; I also agree with this since Merriweather is a repeat offender with two helmet to helmet penalties as a member of the New England Patriots and the Chicago Bears and thus the fine was justifiable.

In the end, it’s an unfortunate ending for both Lacy and Merriweather and only goes to highlight the growing concern of concussions in professional sports and what the referees ultimately have to decide in a split second.

19 thoughts on “Ruling Down The Merriweather Hits”