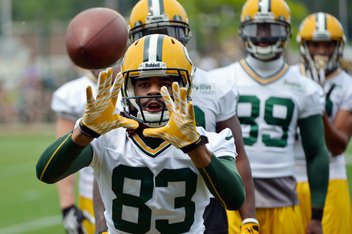 Walker is the latest player to come out of the Packers farm team, also known as Illinois State but whose road was harder than even his teammates.  He saw defensive end Nate Palmer selected in the 6th round by the Packers and then heard that his quarterback, Matt Brown signed as a priority rookie free agent (i.e. a player that signs immediately after the draft finishes).  Walker however, was only asked to come in as one of 27 try out players looking to snag on of the last spots on the 90-man roster.  Walker apparently showed enough during the tryouts and was signed to a contract and perhaps even more surprising was he recently caught the attention of one of the guys throwing the football.

Draft Insider: Dependable small-school receiver with poor size/speed numbers. Comes back to the ball out of breaks, easily adjusts to errant throws, and makes the reception in stride. Fights with his hands to separate from defenders, displays outstanding hand/eye coordination, and competes to make receptions. Stays in bounds running after the catch and gives effort trying to pick up positive yardage.

Packers rationale:  Walker fits the prototypical mold of a Packers wide receiver; he isn’t the biggest, fastest or strongest guy out there, but he has good hands and can run crisp routes.  He is also versatile and can play on the perimeter on in the slot.  You could sort of compare him to a poor man’s Greg Jennings, who himself wasn’t the biggest or fastest but was a smooth route runner who used technique instead of physicality to gain yards.  The Packers wide receiver corps is ripe for change with Greg Jennings and Donald Driver no longer with the team and James Jones and Jordy Nelson’s contracts coming up in the next couple of years.  The Packers did draft two wide receivers in the 7th round but both missed most of camp with injuries and probably aren’t guaranteed a spot on the 53-man roster.  Even if Walker fails to make the squad this year, he’s a great candidate to make the practice squad, where the Packers typically keep at least two receivers.