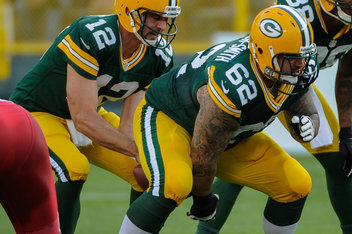 “There’s two main components that a center needs to have, and it’s not quickness or agility or snapping or anything. It’s two things: One, he has to have a good height, and I’m talking about where his butt rests. It can’t be too low because I don’t wanna get deep in that stance and it can’t be too high so I feel like I’m standing up. It’s gotta be just right. He’s got that.  It’s a feel. My center in college was about my height and he’s real low in his stance. So it made me have to kinda duck down a little bit. It’s hard to get out of center. Scott Wells — my previous center — [and] Jeff Saturday: great height. Great butt height.  And the second is most important, and that’s sweating. How much do they sweat? The worst thing that you can have is third, fourth quarter on an October day where it’s 65, 70 degrees and he’s sweating through his pants. Because that is not a situation you wanna be in. You gotta change pants at halftime. Our backup center — great guy — Evan Dietrich-Smith, he has major sweat issues. And when you get that ball snapped up and there’s a lot of sweat that just splashes all over you and on your hands and the ball — it’s not a good situation. So he actually has changed at halftime before. So those are the two things you look for: butt height and sweating. Jeff’s doing really well in both categories. … Low sweat ratio and solid butt height.” – Aaron Rodgers

Ah, classic Aaron Rodgers; but ironically Rodgers’ observations about centers is one of the more in-depth analysis on what it really takes to be a center in the NFL out there right now.  Fans and the media typically don’t pay much attention to offensive linemen in general, but when they do they gravitate towards the all important left tackle position.  Right tackle and guard are gaining a little steam in terms of importance (just look at how many of them were drafted this year in the 1st round), but center still remains the forgotten position.  Outside of being able to snap a ball, what makes a good center?

This question suddenly became more important for the Packers with Jeff Saturday retiring and backup Evan Dietrich-Smith moving up to starting center (which was a forgone conclusion considering Saturday was benched mid-season for Dietrich-Smith last year).  The backup center (who will likely be the “swing” interior linemen as well) previous manned by Dietrich-Smith is now open with rookie JC Tretter presumably being the preferred player to take over the position after being drafted in the 4th round.  Unfortunately Tretter is out for the year after breaking his ankle during OTAs, leaving a rag tag group of undrafted rookies and unknown 1st year players to battle it out for the last roster spot.  The Packers are notorious for trying to fit round pegs into square holes when it comes to offensive linemen so I wanted to see if there were any physical characteristics that previous Packers centers shared.

I won’t pretend to know really what the Packers are looking for in centers, overall centers are definitely the smallest linemen of the group.   Aaron Rodgers has been criticized for being short for a quarterback, but most of his centers have been the same height as him and offensive linemen on average are way taller than quarterbacks.  The second interesting point is that every Packers’ center has T-Rex arms.  Bryan Bulaga fell in the draft because his arm length was only 33.5”, but the average arm length for a Packers center was a miniscule 31.5”.  Now arguably with players in the trenches, a shorter, squattier player may actually perform better in a “phone booth” than a longer lineman but even guards TJ Lang (32.5”) and Josh Sitton (33.625”) have considerably longer arms.

But the most important question (at least for Aaron Rodgers) to answer is what sort of “butt height potential” each center has.  Obviously butt height doesn’t apply to shotgun snaps so for direct snaps presuming that a center has his hands on the ball (which is resting on the ground) and that he bends predominantly from his waist, leg length should be the biggest determinant of butt height.  Of course, centers also bend their knees, and therefore can change their butt height, but most centers appear to bend then knees at roughly the same angle so we can assume it’s about the same for all centers.

To figure out leg length, I extrapolated leg length from arm length, which are commonly recorded for linemen during combines and pro-days and multiplied by 1.2, which is a commonly accepted ratio between the length of a person’s arm and their legs.  Then I took the predicted leg length of the centers who had started for the Packers with Aaron Rodgers under center and averaged it to see what sort of “butt height” range was “acceptable” for Rodgers, which turns out to be about 37.5 inches.

After all that, it appears none of the current possible backup centers really have the right butt height.  Greg Van Roten is probably the closest candidate to what the Packers typically have at center, with undrafted rookie guard Lane Taylor as a close 2nd.  Don Barclay, who in OTAs looked like he was being groomed to be the interior swing man is probably 3rd on the list considering his height and weight but has a considerably higher butt height than either Van Roten and Taylor.  David Bakhtiari, who was rumored to be a potential center during the draft is probably the furthest away in terms of predicted butt height with his long 34” arms.

So in conclusion, in terms of butt height, the Packers have a major issue with as no one on the roster really fits what the Packers and Aaron Rodgers typically like.   How big of a deal is this?  Probably not a big one, but a small change like Rodgers having to duck a little more means a longer time getting out of his drop back and getting the ball out of his hands, which might (theoretically) increase the amount of sacks.  However, if you’ve gotten this far in the article, you’ve just read about a 1,000+ words on the butt height of Packers’ centers, so congratulations you are a true cheesehead.

Now if anyone wants to go to training camp and stare at centers’ butts and record the average butt sweat area and number of pants changes that would further the butt height analysis to new heights.  Do it for science!