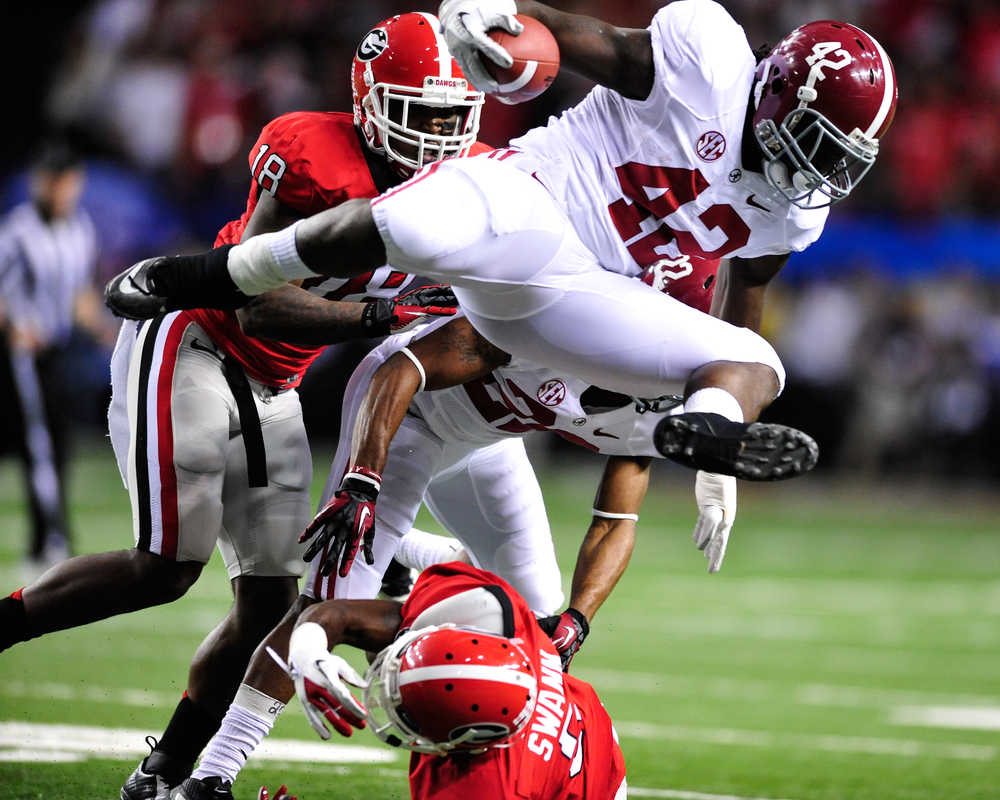 It’s a little early, but the 2013 draft might contain a special treat for Green Bay Packers fans, namely a shot at a Packers rookie getting the prestigious Offensive NFL Rookie Of The Year Award.  Last year’s draft was basically all defense with only BJ Coleman and Andrew Datko getting picked in the 7th round, and both spent the year on the practice squad (although 2nd round pick Casey Hayward almost got the defensive NFL Rookie Of The Year Award, but that’s a different story).

In 2011, Randall Cobb was a good candidate but going up against a loaded wide receiver core with Greg Jennings, Jordy Nelson and James Jones, Cobb ultimately didn’t end up seeing much of the field during his rookie season.

In 2009 and 2010, the Packers didn’t really have a logical candidate as the early parts of the draft were filled with linemen and defensive players.  This year however is a little different where the draft has fallen in such a way and the Packers have drafted in such a way where I think rookie running back Eddie Lacy actually has a pretty decent shot at winning the award.

Pick 8 – WR Tavon Austin, Rams: Likely chance.  Wide receiver production is largely dependent on quarterback production and Sam Bradford hasn’t broken through as one of the top quarterbacks in the league (and may never at this point) and Rams no receiver got past 700 yards last year which probably isn’t enough to garner any attention in this pass happy league.  However, I think if Austin has any shot it’s going to be by using the same route as Percy Harvin, who got in more as a returner and utility man than as a wide receiver.    But if Austin returns a couple kicks for touchdowns, rushes for noticeable yardage and gets something out of the passing game, his total yards from scrimmage may be good enough to get him some votes.

Pick 16 – QB EJ Manuel, Bills: Very unlikely chance.  Quarterbacks almost always win offensive rookie of the year awards, but they have to be on the field and all indications at the moment seem to point to Kevin Kolb getting the start at least in the beginning of the season and it would be surprising to see Manuel win the award if he didn’t play the entire season.  Manuel was purported to be more of a developmental pick with high upside which downplays his ability to start right away plus his draft pick isn’t so high that teams are looking to force him into the line up before he’s ready so it wouldn’t be surprising to see him ride the bench for most of the season.

Pick 27 – WR DeAndre Hopkins, Texans: Likely chance.  The Texans are severely missing a wide receiver opposite Andre Johnson, who while is declining still has the name reputation and physicality to command double teams and defensive attention.  Add a good running game with Arian Foster and Hopkins probably has the best chance of any wide receiver drafted in the 1st two rounds.  However, only 3 wide receivers in the last 20 years have ever won rookie of the year honors, so even as the most likely wide receiver still doesn’t make it a good shot.

Pick 29 – WR Cordarrelle Patterson, Vikings: Very unlikely chance.  Like with Tavon Austin, wide receiver play is largely dependent on quarterback play, and Patterson isn’t going to get any help from Christian Ponder.  Even with the electric Percy Harvin, no wide receiver was able to get past 700 yards of receiving with Ponder behind center.  With Greg Jennings as the primary receiver, Kyle Rudolf as the safety valve and Adrian Peterson as the focal point on the offense, there’s no rush for Patterson to start producing.  Add to that a reported lack of route concepts and offensive scheme in general and Patterson is likely to be relegated to the role of returner and option wide receiver/running back.

Pick 34 – WR Justin Hunter, Titans: Very unlikely chance.  Hunter is also a raw player and on top of that the Titans have a mystery bordering on bust in quarterback Jake Locker.  Add to that 2 former 1st round wide receivers in Kenny Britt and Kendal Wright, and potentially the greatest running back in the league (or potentially the worst) in Chris Johnson and Hunter probably will have trouble cracking the starting roster.  With the addition of Andy Levitre, Chance Warmack and Brian Schwenke, expect the Titans to run early and often which again will hurt his production.

Pick 37 – RB Giovani Bernard, Bengals: Likely chance.  Bernard comes in as presumably the backup to BenJarvus Green-Ellis, who rushed for over 1,000 yards.  But Bernard has the chance to shine quickly as the Bengals passing offense with Andy Dalton, AJ Green, Jermaine Gresham and 1st pick Tyler Eifert will force defenses to spread the field which should mean less stacked boxes for Green-Ellis and Bernard.  If he can supplant the law firm as the starting back he has a good chance to be in the conversation, but chances are better that both backs rotate.

Pick 39 – QB Geno Smith, Jets: No chance.  The Jets are a complete mess and more importantly the front office and coaching staff have no idea how to fix it.  Mark Sanchez is probably not really as bad as he played last year, but his lack of receiving threats as well as running backs didn’t help his cause any last year and they certainly won’t help Smith this year either.  Smith joins a quarterback stable that has to find reps for 5 players and a head coach more interested in defense than grooming quarterbacks.  Add to that his recent personality concerns with firing his agent and texting during team visits and Smith has somehow managed to reach bust status without ever playing, which is no small feat.

Pick 41 – WR Robert Woods, Bills: Very unlikely chance.  Kevin Kolb is decent quarterback given he’s healthy and EJ Manuel remains a complete unknown, but stable quarterback play probably can’t be expected from the Bills this year.  Woods probably has a less likely shot of winning since he’s really not well known as a returner (nor is he really good at returning either) or wide receiver/running back hybrid like Austin and Patterson can perform, so strictly as a wide receiver Woods probably won’t be able to produce enough right off the bat to get in the conversation.

Pick 48 – RB Le’Veon Bell, Steelers: Very likely chance.  While the Steelers do love to throw the ball, they also love to pound running backs between the tackles, which Bell has the size to do (but didn’t really show it in college).  Rashard Mendenhall is now an Arizona Cardinal so the only real competition Bell has is in Johnathan Dywer, who is a decent running back in his own right.

Pick 58 – RB Montee Ball, Broncos: Unlikely chance.  The Broncos have Willis McGahee, and former 1st round draft pick Knowshon Moreno, who both will likely start ahead of Ball.  Unless Ball explodes into the league I would expect to see the three being used in a rotation, which obviously hurts Ball’s production.  He could be an option for check downs and wheel routes from Peyton Manning so he could gain some passing yards but probably won’t be a every down runner for the Broncos so quickly.

Pick 59 – WR Aaron Dobson, Patriots: Very unlikely chance.  The Patriots are notorious for missing on wide receivers and it’s well known that Tom Brady won’t throw the ball to you if you don’t know the offense and the Patriots have one of the more complicated offenses in the league.  Add to that Rob Gronkowski, Aaron Hernandez and presumably Danny Amendola and Dobson is probably the 4th option at best.

Pick 61 – RB Eddie Lacy, Packers: Very likely chance.  Lacy comes in probably already penciled in as the starting running back and is going to see wide open defenses with Aaron Rodgers, Randall Cobb, Jordy Nelson, James Jones and Jermichael Finley on the field.  Josh Sitton and Bryan Bulaga are two of the better run blockers in the league and Lacy is faster and more agile that most give him credit for.  In terms of competition, Johnathan Franklin will probably get into the mix early, but since Franklin is as untested as Lacy I see this as the weakest competition of any running back.  I would say that Franklin also has a shot of winning the award, but 4th round picks almost never win the award so he has that going against him (Rookie of the Year voting is something like a popularity contest, so where you are drafted is important).  Injury is a big issue and perhaps the biggest factor in his production this year.

Pick 62 – RB Christine Michael, Seahawks: Very unlikely chance.  Michael will be stuck behind “beast mode” Marshawn Lynch and isn’t likely to see much time outside of keeping Lynch fresh or as a change of pace option.  It also has yet to be seen if Michael has yet to fully recover from the spate of injuries he suffered in college.

Best shot at winning rookie of the year:

Basically, it’s very likely that either a running back or a quarterback will be selected for offensive NFL Rookie Of The Year Award and considering that this year’s draft was bereft of quarterbacking talent makes it very likely that a running back will therefore win the award.  If you take out running backs drafted on teams with established runners (who presumably will “steal” yardage) you basically are left with either Le’veon Bell or Eddie Lacy.  As I said above I think the Packers are a more competitive passing team than the Steelers at the moment, which should open things up for the running game.  Does this mean I think Lacy will win the award?  No, but he has a good shot.

What do you think?

Who do you think will win offensive NFL Rookie Of The Year?
Pick 8 – WR Tavon Austin, Rams

34 thoughts on “Eddie Lacy…The Next Rookie Of The Year?”