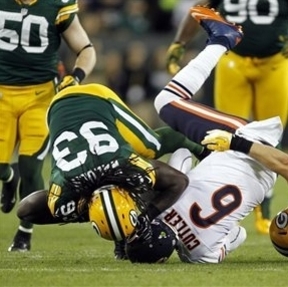 “Good luck […] Our speed guys are going to get around them, and our big guys are going to throw and go,” Cutler said. “We invite press coverage. We invite man. And if we get in that type of game, our guys outside have to make some plays for us.” – Jay Cutler

After that statement, how would defensive coordinator Dom Capers respond?  Obviously by doing the exact opposite and throwing at Jay Cutler a look he’s probably never seen from the Packers that has neither press nor man coverage. In all honesty I’m not exactly sure what the formation is called, DB Psycho?  Woodson Tampa-2?  Well, one thing is for sure, it confused the hell out of the Bears offense and lead to a Charles Woodson interception.

The situation: The score 3 to 13 in favor of the Packers and the Bears find themselves at 3rd and 11 with 3:18 left in the 3rd quarter; in the previous play TE Kellen Davis was penalized 5 yards for offsides, so the Bears are looking for a big drive to bring the game back to a one score difference.

The formation: The Bears start in a 311 formation (3WR-1TE-1RB) with WR Brandon Marshall out wide right, WR Earl Bennett in the right slot and rookie WR Alshon Jefferies out wide left.  TE Kellen Davis is inline outside the right tackle and RB Matt Forte is to the right of QB Jay Cutler.

The Packers respond with their dime package (1DL-4LB-6DB): DE Jerel Worthy being the lone down linemen with Clay Matthews at LOLB and Erik Walden at ROLB flip flopping their normal positions.  ILB DJ Smith has the center of the field while OLB Dezman Moses has replaced ILB AJ Hawk.  In the secondary, CB Tramon Williams is lined up directly in front of Marshall and CB Sam Shields is lined up against Jefferies.   Rookie CB Casey Hayward has Bennett in the slot while SS Jeron McMillian and FS Morgan Burnett look to be playing a 2 deep shell.   None is of this out of the ordinary, but what is odd is that CB/SS Charles Woodson is lined in the middle 20 yards away from the line of scrimmage. At the snap: Both Williams and Shield bail out (essentially playing safety), taking away the deep routes while Moses and Hayward come up to cover the flats.  With Hayward taking the flat, McMillan takes responsibility for Bennett. At the line, both Matthews and Walden get good penetration, which causes Cutler to roll out left, at which point he sees Earl Bennett sitting in a soft zone in the middle of the field. (He’s the guy sitting on the G logo) Cutler throws a pretty decent pass considering Walden destroys him a second later but Woodson sees the pass and drives hard towards Bennett and ends up with the interception. The analysis: The media was quick to blame this on Earl Bennett for sitting in the zone instead of coming back to the quarterback, but I personally think Bennett (and probably Cutler too) had lost track of Woodson.  Everyone knows that Woodson usually plays close to the line of scrimmage and Bennett, probably seeing that both safeties were behind him assumed that he had slipped by the defense, in which case sitting in the zone and getting ready to turn up field is indeed the correct choice.  However since Woodson is in such a strange position, where he is essentially playing Brian Urlacher’s role in a classic tampa-2 look where he’s covering the gap between the two safeties (who in this case are actually Tramon Williams and Sam Shields) either Cutler or Bennett or both don’t see Woodson, which ultimately leads to the interception.

Another interesting thing to note is that maybe one reason to put Woodson so far away from the line of scrimmage is to negate some of Woodson’s lack of speed, who at 36 has definitely lost a step.  To do that, you have to be pretty confident in your run defense (which had done a good job against Matt Forte) or pretty confident in a pass play (which 3rd and 11 and behind by 10 points would typically dictate) to move Woodson away so far from the line.  Also, it appears as if Worthy has taken Cullen Jenkins role as the lone down linemen in the Packers dime package, whether that’s to keep BJ Raji fresh (who had a good game as well), or because he’s simply more explosive off the snap, it is surprising to see a rookie be given the position instead of pro bowler Raji, who had played the position all of last year.

Overall, it’s a very interesting play in the sense that Dom Capers appears to have a lot more flexibility in the defense, not only is he able to move Woodson and Matthews around, which is something he couldn’t really do last year as Woodson and Matthews were basically the only constant sources of pass rush, but he is also able to let Williams and Shields play safety, which he can only really do if he has some other good DBs that can cover.

Author’s note: I’m thinking of making this a regular piece where I look at one interesting play, do you prefer pictures or diagrams of plays?  Also does anyone have a cool name for this series?  Add your thoughts to the comments below.

37 thoughts on “Packers Play Analysis: Week 2 Versus The Bears”