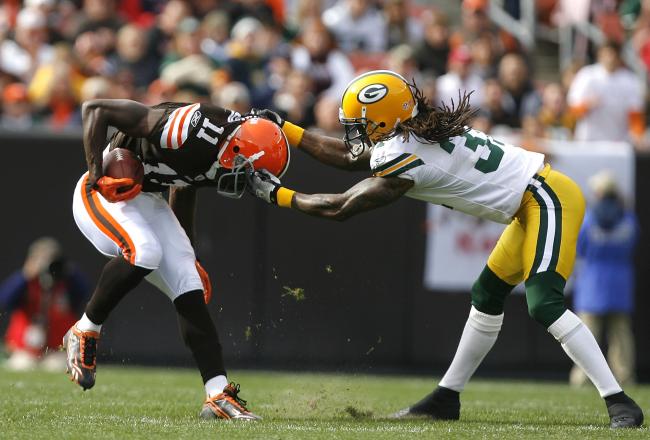 Is it possible for a preseason game to suck?

If it is, then the Green Bay Packers experienced it last Thursday in their 21-13 loss to the San Diego Chargers at Qualcomm Stadium in their preseason opener.  Not only did the Packers lose, the starting offense came out flat with reigning MVP Aaron Rodgers posting a quarterback rating of 0.0 (yes, it’s a meaningless stat, but the offense looked putrid regardless).

Throw in a possible season ending hamstring injury to starting linebacker Desmond Bishop and the 2012 season opened with a rather loud thud for Packer Nation.

That said, it’s a new week and football returns to Lambeau Field tonight when the Green Bay Packers take on the Cleveland Browns.

The Packers enter the game a little healthier than in the game against the Chargers, they still have a ways to go before they can be declared ready to go before the regular season starts.  Greg Jennings is still out with a concussion and the Packers must be more worried about his health than they are letting on.  Marshall Newhouse finally returned to practice and should see his first game action of the season.

With the starters likely seeing very limited action once again, here are some things to look forward to as the Packers’ preseason schedule hits the halfway point:

James Starks has been put on notice

That’s the first thing that crossed my mind when I read the Packers signed veteran running back Cedric Benson to a one year contract earlier this week. Starks got off to a horrible start last week as his dropped pass sent the first team offense into a tailspin from which it never recovered.

Throw in Starks’ disappointing 2011 and his inability to remain fully healthy and the Packers had no choice but to bring someone in to light a fire under his rear end.  Mike McCarthy has said he wants to “fundamentally change” how the Packers run the ball which was a not too subtle shot across the bow for Starks.

It’s a good sign that the Packers seem intent on getting a run game going, but do they have the proper personnel to help take some pressure off of Rodgers?  Stay tuned.  Benson won’t be playing in the game, so this is a golden opportunity for Starks to show he can be the man.

If not, Alex Green will have his chance too.  It’s been nothing short of remarkable how far Green has come in his rehab from his injury that kept him sidelined for most of 2011 and he has shown enough in practice to at least raise some eyebrows.

Could Green and Benson leave Neo in the dust?

The offense: Does it have rhythm?

No one should be overly concerned at the starting offense’s poor showing against the Chargers, but many fans probably will feel better if they see Rodgers sling a touchdown pass against the Browns.  Even without Jennings, the Packers still have plenty of weapons so Rodgers won’t be lacking targets to throw to.

With the Packers still nursing injuries, it’s hard to imagine Rodgers and the starters playing much beyond the first quarter.  The offense will be fine in the real games as McCarthy is running a watered down playbook in the preseason.   Still, it would be nice to see the juggernaut that was the Packers 2011 offense make an encore appearance.

If the Packers continue to struggle, fans still should not be concerned.  McCarthy needs to keep his horses healthy.  He won’t risk his players just to show the offense is still a machine.

The good news? The tackling by the Packers secondary showed improvement.  Also, Tramon Williams flashed his 2010 form that gave Packer fans hope that he would once again be the playmaker that propelled the Packers to Super Bowl XLV.

The bad news? The secondary is awfully thin.  Casey Hayward, who showed promise during practice in camp, looked like a rookie at times and didn’t turn his head when he had the chance to make a play on the ball. Jarrett Bush was Jarrett Bush.  Devon House showed promise….until he got hurt.

With some game action under their belt, the Packers should have an easier time against a Browns offense that is starting a 28 year old rookie at quarterback who will then give way to Colt McCoy.  It’s not exactly the high octane passing game the Chargers run, so this is a chance for the second and third stringers to learn the ropes.

They have to take care of the ball.  Let’s just hope it was some rust.

The offense gets some mojo back and the team overall grows from the loss to the Chargers.  The backups on defense gain some confidence and the Packers get their first win of the preseason.

16 thoughts on “Packers – Browns Preview: Shaking Off The Shaky Start”