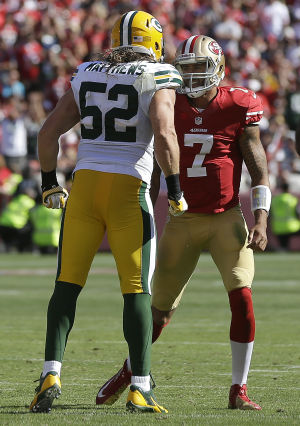 I think everyone agrees Clay Matthews made a bone headed decision by trying to take down Colin Kaepernick on 3rd down; but deep down, especially after the miserable loss to the 49ers in the playoffs last year, we all cheered.  Admit it, you were happy when Colin Kaepernick hit the turf (I’ll admit it).  I’ll even wager some Packers fans kept cheering as Matthews and the rest of the defense got in the ensuing brawl.

This in my mind was a sort of collective validation for Packers fans, who were sick and tired of listening to the allegations of the Packers being a “soft” team and were looking for some example to show everyone otherwise.  On Green and Gold Today, surprisingly multiple callers chimed in that they had no problem with late hit and wouldn’t mind seeing Matthews do the same again.

To me this is a very dangerous slippery slope; it’s one thing to play aggressive and at the edge of the rules, it’s another thing to break them.  You simply have to look east to see what happens when a team takes it’s aggressiveness too far.

The Detroit Lions to become the first ever team in NFL history to go 0-16 after 7 years of catastrophically poor management by general manager Matt Millen.  Obviously with such a dumpster fire there was a clean sweep within the organization and the Lions ownership sought to bring in a new mentality to the team.  Starting with head coach Jim Schwartz, the Lions sought to be “tougher”, a team that wouldn’t be a push over and get back to being a relevant organization.  Sounds like a good plan, but ultimately I think it’s backfired; in the past couple seasons the Lions have been a far better team than their record suggests, which is directly due to their “toughness” literally losing them games.

Since Schwartz’s hiring, the Lions have perennially been one of the most penalized teams in the NFL and are now famous for their lack of control and abundance of head scratching personal fouls.  Ndamukong Suh has been voted as the dirtiest player in the NFL after multiple questionable hits and some very stupid mistakes including the EDS stomp, the Matt Schaub’s stomp and just last week the John Sullivan low block that apparently will cost him $100,000.

Even quarterback Matt Stafford has gotten into scraps with the other team, something that is unheard of for a starting quarterback.  Simply put theLions can’t get out of their own way, their tough mentality leads to bone headed decisions which ultimately bring the team down not only on the field but also the field of public perception.

You might be thinking, well the Lions are a complete mess, I trust that the Packers would be able to keep their players in check.  But in 1980’s the Packers were the Lions, a terrible team who’s only “strength” was being tough.  Sure the Packers were “tough” but weren’t winning games and looked more like losers who only bullied other people to get attention.

This is perhaps highlighted best by Charles Martin’s egregious late hit on quarterback Jim McMahon in 1986 that ultimately ended McMahon’s season.  Fans, who had already given up on the Packers winning that entire decade reveled in knocking out the star quarterback of the Chicago Bears, their most hated rival.  It’s taken almost 30 years, 2 Super Bowl wins and a consistent winning tradition of Mike McCarthy, Mike Sherman and Mike Holmgren to really erase that image.

However, I’m not completely criticizing the hit as I think it’s not just a one sided story.  Matthews was put in a difficult situation and in my opinion guessed wrong; Matthews literally has a split decision to figure out if Kaepernick is going to run out of bounds or try to dive for the 1st down.  Knowing that Kaepernick is a running quarterback and that getting the 1st down would essentially give the 49ers a touchdown, I’m actually a little surprised that Kaepernick didn’t try to dive to the sticks, in which case Matthews hit would have been legal and good defensive stop (maybe not clothesline him, but that’s a separate issue).

The second issue is that Matthews is probably trying to make a statement and rally the troops and show the rest of the league that the Packers aren’t a “soft” team and that every team with a running quarterback (read: RGIII), shouldn’t look to the playoff game as a game plan.  I think people are quick to forget that Matthews made multiple statements on his teams’ toughness (like stuffing the running back 5 yards behind the line of scrimmage)  and aside for the late hit I think he did a good job making the point that the defense will not be a weak point on this team.

I think in the end, we should support Matthews for his intentions but not for his actions (specifically the late hit).  I personally don’t think Matthews every went out on the field with the intention of purposefully hurting Kaepernick or any other player and I do think his aggressive mentality will be good for the defense.  However, players must always know not to cross that line between being aggressive and dirty and Matthews should not be appluaded for his late hit against Kaepernick.

If you want to applaud Matthews for being aggressive, applaud him for sacking Kaepernick 7 yards behind the line of scrimmage that ended the discussion of the 49ers running the read option, not for clotheslining Kaepernick.

72 thoughts on “Should We Support Clay Matthews’ Late Hit?”