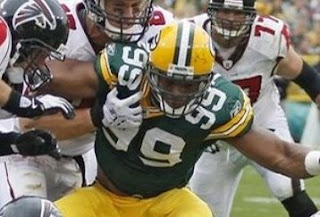 As the Packers OTAs have progressed, one of the most surprising stories has been the rapid ascension up the depth chart of Jeremy Thompson. A fourth-round draft pick out of Wake Forest (102nd overall) in 2008, Thompson saw limited action in his rookie season.

Thompson was inactive for the Packers first four games, but when Cullen Jenkins’ season came to an early end, Thompson stepped into defensive end rotation. He eventually started three games, but was hampered for much of the last seven games with an assortment of injuries.

Thompson didn’t get a chance to show very much in 2008, but the Packers coaches thought he could be a contributor at DE in 2009 if he bulked up and added another 15 pounds to his 270lbs frame.

Then of course, the defensive coaching purge hit Green Bay on Jan 5, 2009. Soon after, new coaches and a new 3-4 defensive system were introduced.

In retrospect, it was the best thing that could have happened for Jeremy Thompson. He is now being asked to play a position the new Packer coaches feel he is a natural for.

Thompson changed his training regimen over the offseason, emphasizing speed and hip-flexibility drills. He also abandoned the need to put on more weight, instead focusing on becoming leaner and stronger at the same time. The end result was he actually dropped 10 pounds, while gaining speed, flexibility and strength.

Thompson has also been working extensively since January with linebackers coach Kevin Greene on techniques and tactics. He says every day Coach Greene will pick one aspect of his game that needs improving and work on it extensively. Greene has commented that he is “excited” by Thompson’s athletic ability.

Evidently, all these factors have sent Thompson rocketing up the depth chart. He was installed as the first team right OLB at OTAs even before 2009 No. 1 pick Clay Matthews III injured his hamstring.

There have been a multitude of positive quotes about Jeremy Thompson coming out of Green Bay. Mike McCarthy called him “a natural fit for this defense.” Dom Capers said, “He’s made progress and, through just a short period of time we’ve been around him, has been encouraging. I think he has the ability to play the position.”

Capers also warned, however, not to read too much into who’s on the No. 1 unit during OTAs, because there will be significant competition for the job in training camp.

So as this relative unknown makes his bid for a starting spot over the much more high-profile Clay Matthews III and veteran Brady Poppinga, it left me wanting to know more about Jeremy Thompson.

Here’s what I found…

Thompson did play some linebacker in High School, as well as tight end, running back and wide receiver. He also earned four letters in basketball, three in track and one in tennis. Natural athlete.

At Wake Forest, he was a two-time Academic All-ACC selection. Intelligent

As a senior at Wake forest, was a finalist for the NCAA National Sportsmanship Award. Good Person

Played in 46 games with 32 starts for Wake Forest and finished his career with 111 tackles, 20.5 tackles for loss and eight-and-one-half sacks. He also blocked two field goals and had two interceptions, one of which he returned for 86 yards and a touchdown. Productive.

Although Wake Forest plays a 4-3 defense, they do often drop their defensive ends into pass coverage, like an outside linebacker. At times, he even lined up on the slot receiver. Versatile.

So putting all these facts together, our quickie profile of Jeremy Thompson reads: Natural athlete, intelligent, good person, productive, and versatile. Sounds like “Packer People.”

Will all of this translate to a significant role for Jeremy Thompson in 2009? We’ll have a better idea after they put the pads on at the first mandatory mini camp June 22. Stay tuned…

For those of you that can’t get enough, here are some additional facts about Jeremy Thompson…

The selection of Jeremy Thompson in the 2008 draft represents the first time Packer GM Ted Thompson ever traded up in the draft.

Thompson was named to the National Football Foundation’s Hampshire Honor Society for players who maintained a 3.2 GPA or higher throughout their college career.

Thompson was only the fifth player selected from Wake Forest in the school’s  history.